As soon as the weather changes from cold to warm, it’s very common to find your home has become the habitat for spiders. Conversely, as soon as the weather begins to get a little bit colder, they will seek refuge and you can end up with an infestation. This isn’t a necessarily bad thing because these creatures are very important when it comes to eating bugs in the home, especially the common house spider. They are only dangerous if they are the poisonous variety, such as Black Widow or Brown Recluse. However, if you  or any of your family are suffering spider bites, then it is maybe time to do something about it.

So what’s the short answer? Well bleach is a common household product, used in cleaning and it can be effective for killing spiders with a spray bottle. It works quite quickly, but one drawback is that while bleach can kill spiders, it is also a corrosive chemical, and can be harmful when used around children and pets.

As you try to get rid of spiders in your home, you could just be preparing a favorable condition for other creepy crawlies to invade your home. They generally hunt prey such as flies and other insects and can stop them from becoming a problem. In that case, it is necessary to deal with them yourself or to call in an exterminator if you’re afraid of spiders or suspect they pose a threat to you or your family. 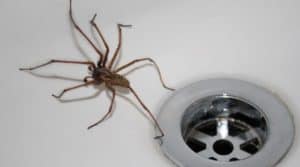 Bleach contains acetic acid and can be very effective when it comes to keeping spiders away. It also works to eliminate webs. Spraying water and bleach directly on a spider or its web is very easy and effective way of clearing them out your home. You can also use the mixture on the exterior of your home to prevent them from entering your home. It is very important to spray in all the gutters and dark crevices where the spiders are hiding.

When using this chemical, make sure to take all necessary precautions. Protective clothing and protective eye wear are highly recommended to avoid injuries as well as chemical burns from taking place when trying to remove spiders using bleach.

Today, spiders are found on every continent around the world that is permanently populated. They are also among the most diverse living things in the world with nearly 40,000 different species. However, nearly all species hate water. You may spot them hanging out in your bathroom, but you will never see them around a body of water, except for only a handful that actually live on or in water.

Although many think that spiders are insects, in reality, they are arthropods and arachnids. All species have eight legs and most have 4 sets of eyes. However, different species may have different eye profiles. Female spiders tend to be bigger than their male spider mates, but these creatures are very prolific. A spider may lay up to three thousand eggs in a lifetime. You may be able to identify them by their egg sacs, which look like little white balls.

Although they may be scary since some of them are poisonous, spiders also provide silk, which is the strongest material ever known by man. This material that they produce can never be manufactured even synthetically because it’s too complicated. Each and every spider produces some form of silk and uses it to make the classic web, which is used to catch its prey.

Bleach that is normally used in laundry is a very good solution that can be used for exterminating spiders. Its ability to discolor colored fabric, whiten white clothes and neutralize anthrax makes it a multi-purpose solution. It’s also categorized as a fungicide and a pesticide because of its ability to destroy bacteria cells. It’s also able to deter household pests such as spiders that are living in your home or outside your garden area. The acetic acid in the spray mixture burns them on contact.

When using a chlorine product or solution, extra precautions should always be taken because it has quite harmful side effects on both humans and can burn into inorganic surfaces. Always make sure you protect your eyes and hands when using water in a spray with bleach mixture around all the affected areas.

To eliminate them, you need the following materials: Here is how to go about it:

First, mix three parts of water with one part of bleach (you can use Clorox or some other brand). As soon as you have thoroughly mixed them, pour the solution into a spray bottle. Spray the mixture directly on the spiders or the affected area where you find their webs, within a six to ten inch distance, using a spraying bottle filled with the mixture.

Use a spray to treat all the affected areas. The amount of solution you need depends on the size and number of spiders you want to get rid of. The mixture should be sprayed on the places that they are known to hide, nest or enter the home once a week until the winter season comes to act as repellant. As soon as all the spiders are dead, you should sweep the whole area to remove them and dump them into the trash can. Any remaining mixture that can be seen on the surface should be wiped off thoroughly so as to prevent bleaching effects that may take place.

Once again, be very careful how close you are when using the mixture and don’t inhale the chlorine fumes. This is because it is harmful and can damage your skin and eyes if it comes into contact with these organs for a longer period of time or in larger quantities. Another way to repel them from a particular area is to let a teabag soak in the solution for a few minutes, and place one or more of them in the problem areas around the house. Always be careful of the areas you spray since it can discolor floors and walls.

How long will bleach take to get rid of spiders?

The bleach shouldn’t take that long at all to work. It really depends on the size of the spiders and the concentration of the mixture. For big spiders, it might take longer. It can kill them fast and take from a few minutes to a few hours for it to take effect. If it doesn’t work the first time, you may need to increase the concentration and try again.

The brown recluse spider is a venomous spider, which is why you should be cautious when approaching them with a Clorox bottle. Some people claim that it removes them, while others believe it doesn’t. Use of another chemical may be required and will take a while, but yes, they can also work effectively.

A bleach spray can be an effective means of destroying spider eggs and young spiderlings. The acidic nature of the solution will break through the egg outer layer and also their exoskeletons.

What about black widows?

The black widow spiders is a dangerous species with a nasty bite, so caution is advised when approaching them. While bleach can be an effective way of keeping them away. With this species, it may be better to look at alternative treatments, or to be of the safe side it is better to call a professional pest exterminator.

Can bleach solve your spider problem? Yes, it might be able to help for several reasonss. It’s classified as a fungicide and a pesticide due to its chemical composition. It can also discolor colored surfaces or products and whiten white garments. All these effects are caused by an acid present, which eats away anything that comes in its path. Its acidity, too, gives it the ability to kill household pests.

So, as chlorine is the best for getting rid of spiders, users must exercise extra caution when using a spray so as to avoid accidents. Hope this helps to solve your pest control problems.

Continue Reading
link to How to get rid of mice in your house, walls and attic - tips and tricks